Christian LAMIRAND was born in 1947 in Audruicq, in the French region of Flandres Maritimes. He lives and works at Loison-sur-Créquoise 62990 where his art studio, “SPIRALE”, is located.

He has focused on painting and sculpture since 1968 and also practises photography and serigraphy.

Personal and public exhibitions have represented as many milestones in his career ; but it is at ” SPIRALE ” where the original character of his work may be fully appreciated.

What is most striking in Christian Lamirand’s work is his approach. He summarises the signs and symbols of all civilizations to give them a very contemporary significance : “these old and sometimes antiquated signs are the message which our distant forebears left us to address our future with more serenity and find genuine values, in particular those which make of human kind an integral part of nature”, he says.

The meticulousness and complexity of his work may surprise many. A plethora of signs intertwine to form compositions which are often structured starting from the centre by means of spirals, circles or geometrical forms.

The very sharp and contrasted colours also contribute to the dynamics of the canvas.

There is in his work an almost alchemical research, a search for the roots of all things and in parallel a very contemporary step in terms of subjects and concerns.

At the contemporary art gallery “Spaces 36”.

The work of a painter may be interpreted by some as an extravaganza of colours, by others as worthy of the monks of the Middle Ages, as meticulous as the dedicated copyists were who decorated bibles with ornate illuminations…

We embarked on a trip through an idealised cosmos, which reflected iridescent crystals as a million spots of light, a thousand colours, a magical treat… Christian Lamirand’s work conveys personality and originality.

In his art gallery, “Spirale”,the spiral being the symbol of evolution and movement, this man who dreams of unfettered freedom “thus travels ceaselessly, in the space of another time, from one universe to another, one civilization to another. Primitive arts, M.C. Escher, rupestrian arts, the Middle Ages, the Celts, Tibet, the marine world… are as many sources of inspiration. 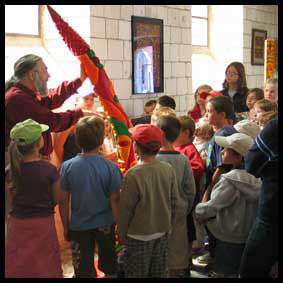 For some time now, Christian Lamirand has crossed the third dimension : he is currently working on 33 totems which will be exhibited at the “celebration of wood” event in Hesdin. From one to four meters high, carved or painted, these totems will be laid out according to the principle of the mandala… ” He does not pursue the metaphysical approach favoured by Tibetan monks or the Amerindian Shamans but a continuing pictorial search whereby the universe of signs constitutes an original aesthetic source.